(Dark green and green represent countries from which we had responses.) 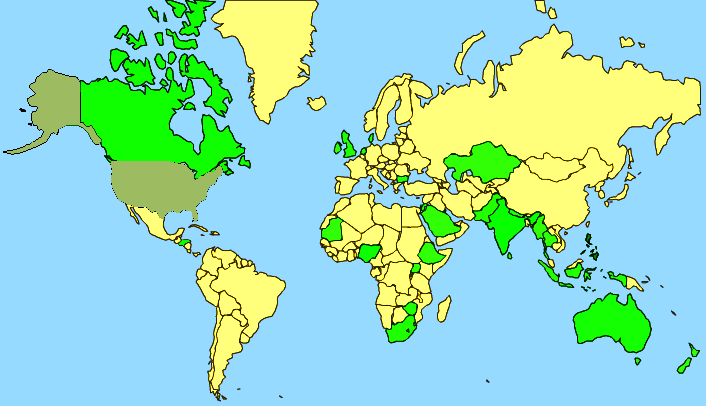 List of countries reached from 3/21/08 to 4/28/08
(We have had responses from the following countries/territories.)

Due to the increasing number of countries responding, we no longer will keep track on this list.

As of the end of August, 2008, the number of countries responding had reached 79.

The college has now been accessed from all 6 of the inhabited continents.
(Most systems of division consider Antarctica to be a separate and uninhabited (7th) continent.) 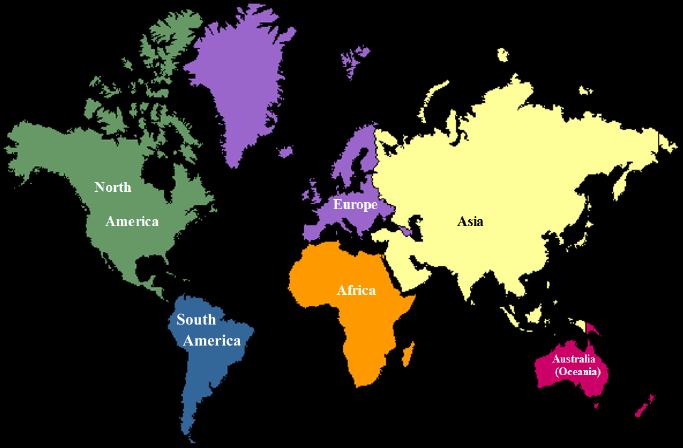 Countries from which we had students taking online Bible classes.
As of 04/28/08 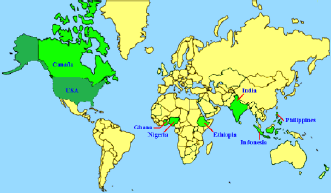 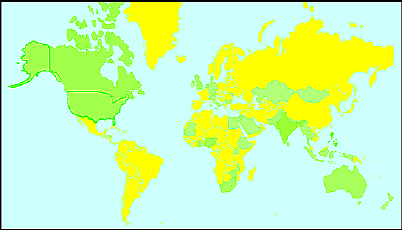 In 2 months we had respondents from 36 countries.
(Green areas on the map.) 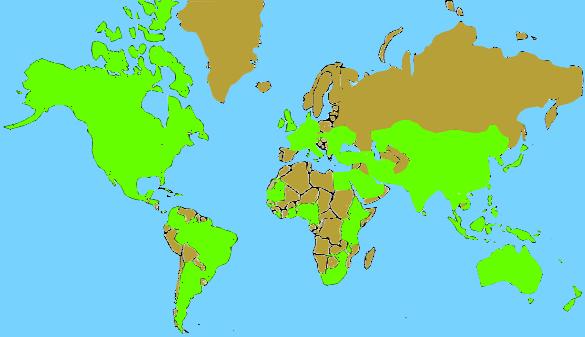 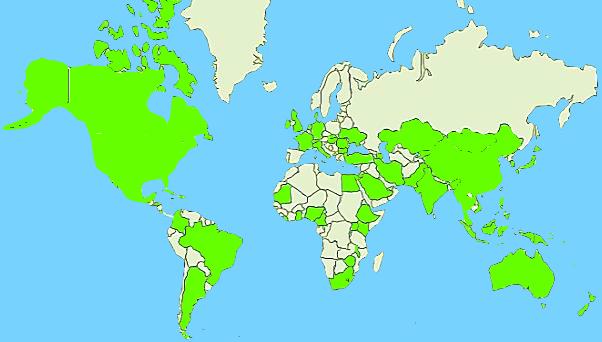 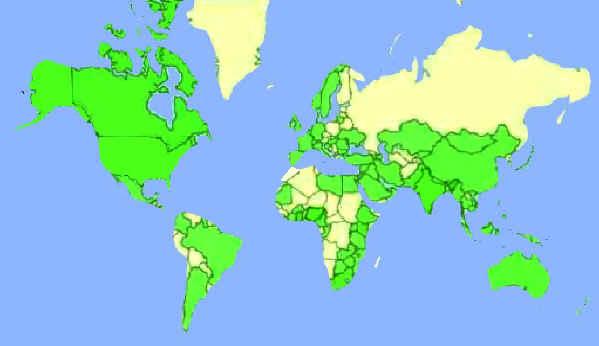 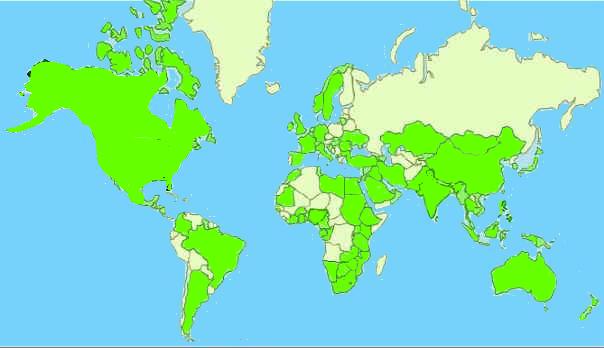 Due to the increased traffic we no longer update this list. 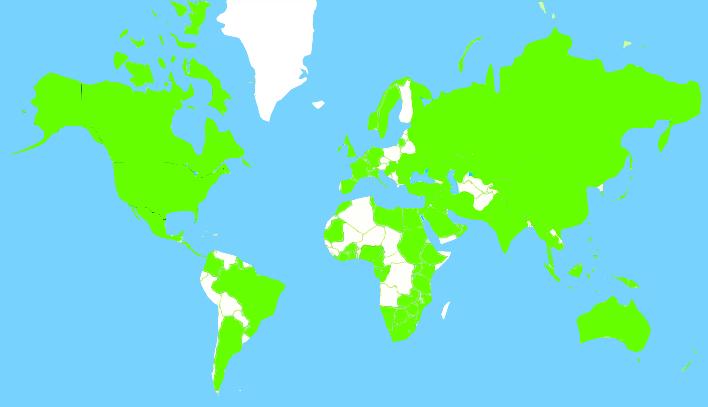 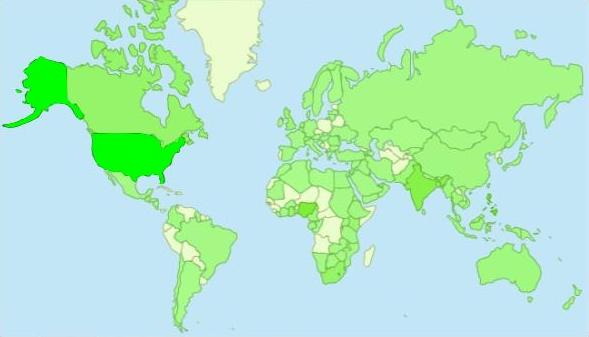 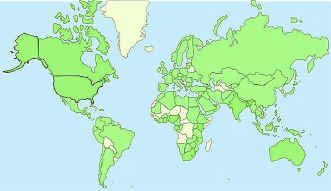 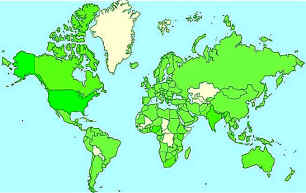 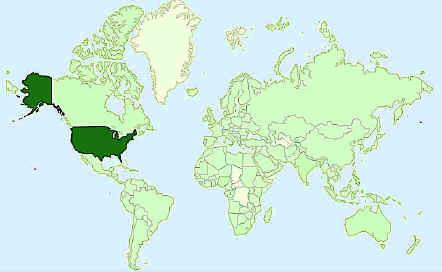 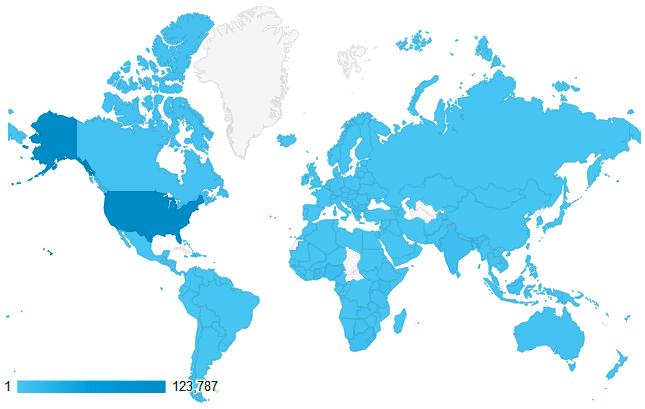 God is now using this ministry to teach His true Word to people from a dozen different denominations and many more non-denominational churches around the world.  SLBCs material is being used in 15 different countries in various Study Centers, started as a direct result of the free online Bible College: 3 in Nigeria, 1 in Uganda, 1 in Rwanda, 1 in Italy, 2 in India, and several in the Philippines as well as an Independent Baptist Study Center in Nigeria that is downloading, printing, and using all of our online courses. One Extension Campus in the Northern Philippines, where American Missionaries are told not to go because of the rebel activities there, now has over 40 students.  Most of them are pastors of Filipino Baptist Churches who come to the Extension to pick up their textbooks, which are printed from master copies sent to them on disk by SLBC, and to take their tests.  They then return to their villages to pastor their churches and to train preachers to go out and evangelize and start new churches in nearby villages.  The pastor who is running that extension has now recruited others to help him translate our material into 3 of the major languages spoken in the Philippines, and when enough of the course material has been translated, then we will set up an online college strictly for Filipinos where everything will be in their own language.  We are also currently searching for translators to prepare our material for use on a Spanish language website.  Our Affiliated Study Centers are giving on-campus training to 32 indigenous pastors in India and another is training 25 indigenous pastors in Italy.  One of our campuses in Nigeria has 22 indigenous pastors as students.

Our material is also being used, exactly as is, in 3 Pentecostal Bible Colleges in Africa and the Philippines, and as Sunday School study materials in dozens of churches of various denominations.  Our online student body is composed of a cross-denominational representation of Christians and non-Christian groups including Baptist, both denominational and non-denominational Independent Baptists, Pentecostal, Assemblies of God, Church of God In Christ, Lutheran, Presbyterian, Catholic, Anglican, and a host of non-denominational churches.  Many of those churches are also using our material to train their preachers who are now out and starting churches and using our material to teach their new converts everything from Bible doctrines to soul-winning and discipleship.  And some of those second-generation students are now out starting new third generation works.  The overwhelming majority of these Churches are being pastored by indigenous preachers, preaching to their own people, in their own languages, in the context of their own culture, telling them of the Saviour who was sent for all people, of all cultures and tongues, in all times.

Through those three generations of students using our material, we conservatively estimate that we are intimately involved in the Bible education of more than 35,000 people as of January, 2015.

In addition to those of God's people that we are training, we also currently have students who are Mormon, Muslim, Hindu, and Buddhist and some who claim to be atheists and have no religion at all.  They are all being taught the true Word of God and we are believing God when He tells us in Ro 10:17 that "... faith cometh by hearing, and hearing by the word of God." and also the truth He teaches us in John 8:32, which you will find quoted below.

It is the policy of the online college that all students must start with the First Year Courses; and the first course they are required to take is the course on Salvation.  From there they work their way through courses on The Church, Baptism, Eternal Security, Bible Doctrines, the King James Bible, Soul-winning and Discipleship.  These are just some of the basic first year courses that ALL students are required to take if they choose to study with us.

Our God-given mission is to teach the true Word of God to anyone of any denominational or non-denominational background, and also to those who claim a different religion or even no religion at all, in every nation of the world who exhibit a curiosity about it and choose to contact us online.

EXPENDITURES:
March 2008 through January 9, 2015.
(Does NOT include start-up costs for computers, software, small office facility, and other equipment, which totaled $4,000)

Total cost of high-speed internet to access and maintain the site: $3,000.00

Cost per student including those being trained with our materials in Study Centers and Churches
(not including start-up cost): $0.26 - that is 26 cents per student.

Cost to student ratio overall (including start-up cost): $0.38 - that is 38 cents per student.

Our next step is to build facilities and hire 2 more staff to accommodate the remarkable growth of the college.

The college has now outgrown the one room where the online college office is now physically situated.  It has also outgrown the ability and time constraints of the one staff member who has been building and maintaining the website as well as researching, writing textbooks and workbooks, locating public domain textbooks or facilitating rights of use permission from authors to place their works online for free use by students, and taking care of the administrative and secretarial work for the college.  Two more staff members are needed immediately to help with these duties.  Because of the growth of the college, which is gaining from 1-8 new students every day seven days a week, and a current student body of over 7,000 students, it is now necessary to expand both the facilities and the staff to keep up with this accelerating growth.  Currently there are 3 Remote Staff members that are able to handle some of the workload that can be handled remotely, but 2 staff on site are needed to take care of duties that must be handled here at the main office.

To finance the ministry, the Foundation for Biblical Studies has been formed as a vehicle to accomplish this purpose.  Although the college is completely free of cost to the students, it is a fact that "nothing is free."  Therefore, the college is seeking grants and donations, through the Foundation, to finance the college and it's expansion of both facilities and staff and to increase its service to God's people and the world at large.

A campaign is under way to facilitate donations to the Foundation for the college.

If you would like to make a donation or if you know of a grant source (non-governmental), please click the following link:
Donation or Grant Source.

Administrative Fee:  This fee was instituted on July 1, 2017.  This fee is for all students.  A waiver is available and will gladly be granted to any student who feels the fee would be a burden.  Proof of financial status must be proved.  Details can be found on the Administrative Fee page.